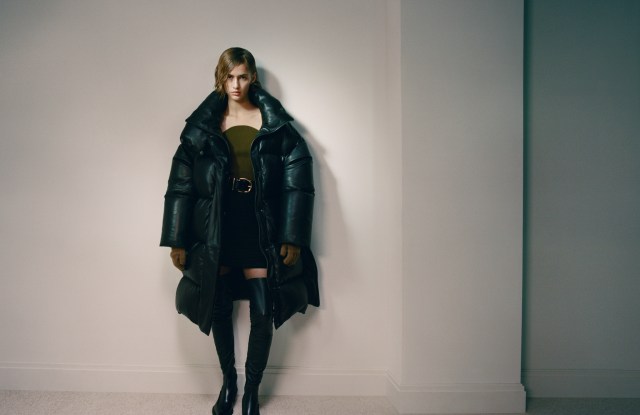 “It wasn’t ‘Miracle on 34th Street’ that made me want to move here, it was ‘Taxi Driver,’ ‘Desperately Seeking Susan,’ ‘After Hours’ and ‘Fatal Attraction,’” said Khaite designer Catherine Holstein of the references behind her fall collection film, an ode to New York City in all its gritty glory, with a cast of kick-ass female night crawlers who go total Scorsese, tagging, smashing and grabbing on the streets of Chinatown, the Lower East Side, Bushwick and Coney Island.

“We didn’t come to New York for comfort, we came here for danger…” said the designer, who tapped director Sean Baker of “The Florida Project” and “Tangerine” fame to bring her sexy-minimalist, heir-to-Helmut Lang aesthetic to the short film, one of the best of the season (because digital fashion shows have made us all into film critics).

“With all the talk about the exodus during the pandemic…and even before, and how New York was turning into a giant Starbucks…I wanted to talk about the romantic image of New York as a movement. It’s always going to be tough, and like you have to claw your way to the top — that’s the beauty of it,” said Holstein, who presented the idea that women can also live dangerously — in a glossy black 1970s leather trench, a slouchy oatmeal cashmere cable knit, cream draped jersey off-shoulder dress and green apple tailored coat with dramatic faux fur collar.

Not that you can see much of it with all the action. “Khaite isn’t just a clothing brand, it’s a feeling,” Holstein said. “I don’t care if you have the bag in the image because as long as the image is impactful, that will sell the bag.”

While she doesn’t do mood boards, the designer knows how she wants to dress — and her fashion history.

“There’s all this talk about the Roaring ’20s, and when I was finished with this collection, I was noticing how straight a lot of the silhouettes were, and how much of a release I felt, similar to the 1920s…and we introduced a jersey dress category, which is very 1920s. It was the most revolutionary transition into feminist dressing we’ve ever seen, and I was always taught that was because it was coming off World War I and the suffragettes, but it was also coming off of the 1918 Spanish flu…”

Holstein’s brand of sexy was more mean streets this season, with leather puffer jackets, short skirts and second skin boots that referenced another feminist thriller, “Klute,” tempered with the softness of beautifully asymmetrical, draped jersey dresses, some with bubble hems, others with dramatic open backs. And the film should appeal to her growing fan-base of women looking for a new brand of cool.

Business-wise, things are on the upswing, she said. “We have been extremely lucky — March through June were the hardest months. This is the second time around having my own company — the first time I had to close after the 2008 crash. And I remember screaming on the phone in March to my partner, ‘Not again!’” (Adam Pritzker of Assembled Brands is a majority shareholder, while Holstein and a hedge fund hold minority stakes.)

But she didn’t lose any wholesale orders, and preemptively canceled resort, resulting in her company becoming profitable for the first time. “We grew 70 percent last year, I feel bad saying that, and have all this guilt, but we are ending seasons on 80 percent sell-throughs and getting reorders,” Holstein said, adding that this year she is on track for 120 percent growth, and will open four shops-in-shop — at Bergdorf Goodman, Harrods, Le Bon Marche and Babuskha in Russia. “We’re growing very fast,” she said, noting that shoes, launched in June 2020, now represent 27 percent of the business. A store of her own is also on the horizon.

As much as she loved making the film, she can’t wait to get back to the runway. “I roll my eyes when people start negging on fashion shows. We saw such robust growth when we started doing them, that’s really when people started talking about the brand,” said Holstein, a New York lifer. “I would never go to Paris and I have my own words for designers doing that.…Telfar was on the cover of Time magazine, don’t tell me New York doesn’t matter.”