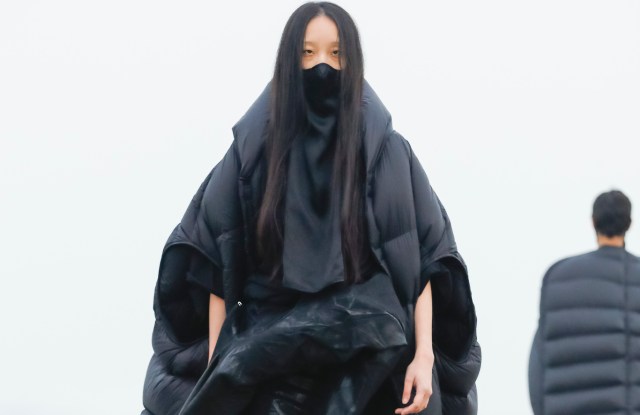 Rick Owens is one of the few designers in any fashion capital to put face masks on all of his models, and they added edginess — and a dose of reality — to the grandiose couture shapes that glided across a gloomy, deserted Lido pier equipped with a fog machine and strobe lights.

In addition to that theatrical bombast, Owens stacked superhero shoulders onto flowing capes and cropped bomber jackets as a way to mock “male oppressive energy” and conservatism. He also proposed skin-tight leather bodysuits that seal off the body “like an upholstered gear shift knob.”

With the coronavirus still wreaking havoc and threats to democracy abounding, why ease up on responsible PPE and defiant fashion statements?

Seriously rattled by the mob that stormed Capitol Hill, and other attempts to subvert the U.S. presidential election, Owens transformed his repressed rage into a raw barn-burner of a men’s collection in January. His fall women’s effort reprised many of the fabrications and shapes, the same fierce attitude — plus the added knock-out punch of glamour.

The designer swears by the George Santayana adage, “Those who cannot remember the past are condemned to repeat it.”

“I’m a Scorpio, so I hold grudges,” Owens said over FaceTime, grinning mischievously. “This is about defiance against menace. It was also about mocking convention,” he said, rattling off a few targets: “Our pajama culture, our comfort culture and our entitled culture.”

In his view, wide shoulders “are a middle finger to a lot of that.”

So too the fishtail gowns and skirts — even if said finger was sheltered under an opera-length gauntlet. Owens’ swishing, couture-like creations seduced with their dignity and their drama, jutting volumes at the hipline or shoulders adding an alien touch. The one-sleeved, sculptural finale gown trumped every bride during the most recent couture week.

The show, livestreamed from Venice, cast a spell: the forlorn beach with its sickly green water, the leaden sky and all those swanky dresses, robe-like coats and puffer capes done up in the colors of the giant stones stacked up against the long, concrete structure.