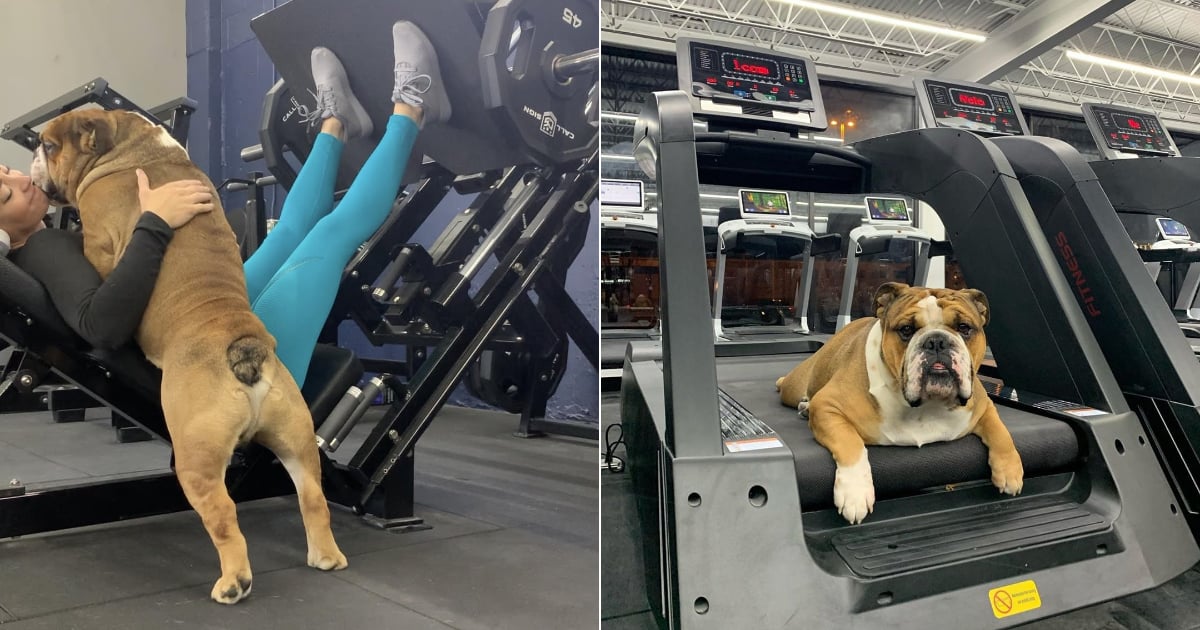 Gus belongs in the gym — the English Bulldog has been among the weights and cardio machines since he was six weeks old. He likes to wobble his way around The Foundation, the facility his owners, Alexis and Matt Karstetter, run, and plop down on the treadmill or greet customers. He is, in fact, the official mascot of The Foundation — it says so on the wall. But, more importantly, he loves to join in on workouts.

“No matter what I’m doing, he is either sitting in between my legs or staring at me sitting next to me (I swear he’s judging me or correcting my form in his head lol),” Alexis wrote to POPSUGAR via email. “He LOVES self-propelled treadmills and will start running without any coaxing. He is also slightly obsessed with medicine balls and BOSU balls.” If you browse through Gus’s Instagram account, which has amassed over 28,000 followers, you’ll see that he has a knack for sneaking up into Alexis’s space mid-sweat session (one viral video ahead shows him going up under her sweatshirt during a plank hold!).

Alexis, 32, and Matt, 36, opened The Foundation’s first location in Manhattan, Kansas, back in November 2015. They just opened The Foundation Westport in Kansas City on Dec. 1 of 2019. Gus, Alexis said, splits his time between both gyms. “We host annual sanctioned Powerlifting meets and he always attends those, too. He is a huge part of our Foundation Gym Team & Family!”

Alexis gushes that Gus, who turns 3 on Feb. 11, is extremely laid-back. “We have had people walk into the facility and state, ‘You have a bulldog?! Sign me up!’ We also have had members not be keen on having dogs around (or just flat out not like dogs). He eventually wins them over with his adorable booty shakes and squishy face.” We don’t blame them!

Note: Alexis says that The Foundation runs a “pretty tight ship.” Their members do not leave out weights, and they take care of the equipment, so Gus is perfectly safe wandering around. Ahead, check out this wrinkly, derpy, and absolutely adorable gym-friendly dog in all his glory! We promise you won’t be able to contain your excitement (we know we couldn’t).